What does PractiKid do for your children?

A sympathetic measuring tool for the digital indigenous generation.

Cartoon-like forest themed videogame where the children can choose their companion.

Cognitive characteristics can be precisely measured during the game.

Results are shown in the form of descriptions as well as visually. There are also recommendations for improvement.

Compared to the paper-based tests, PractiKid has a device familiar to the digital native generation, while also having a likeable appearence. It is also eco-friendly. This self-developed multimedia device has a central touchscreen, a smart pen, specific sensors and switches.

Game-like - The test environment is an animated cartoon

PractiKid is a methodological game, never being compulsory or tedious. On top of the kid-friendly excersises, kids love it for it's animated story. This way the measurement feels fun and entertaining for the children, while they are helping the creatures of the forest alongside their choosen companion.

The sequence of the gamified excersises change flexibly during the measurement based on the child's abilities and speed. This helps avoid stumbling, breaking immersion and other feelings of failure that may occur. What is left is positive reinforcement and encouragement!

Objective - What matters is the "How" not the answer only

PractiKid's speciality is monitoring the way and speed an excersise was completed, which can be more telling than only taking into account whether an answer is correct or not. The detectors and sensors of the device collect data unnoticed during the excersises. This data is then compiled and automatically assessed by the system. 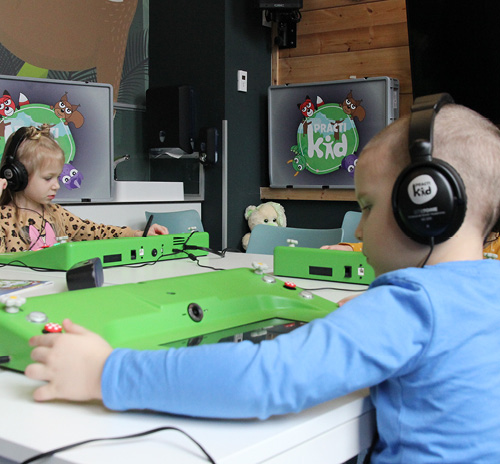 PractiKid has two locations in Hungary. One in Budapest and another in Miskolc.

The results of the measurement 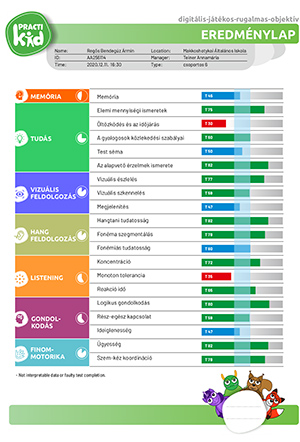 Who do we recommend PractiKid for?

Do you want your kid/kids to experience the first year of school positively?
Test their learning skills with PractiKid!
Register!